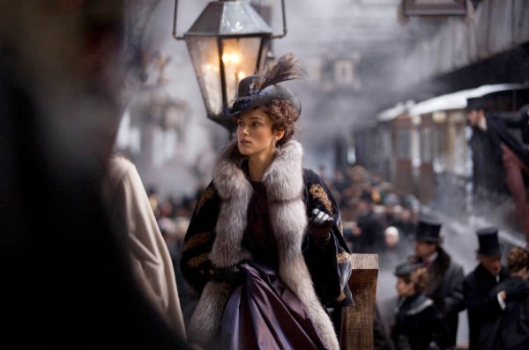 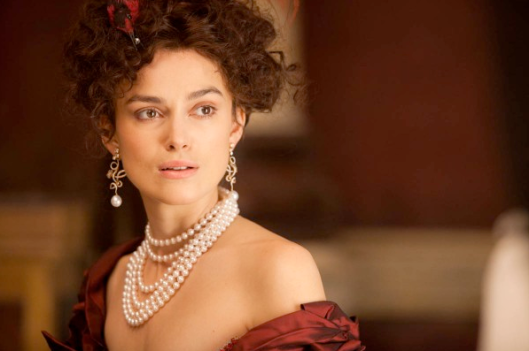 She’s a tall Scottish lass that looks great in clothes.  Not to mention, an extremely intelligent and fierce actor.  She’s not a mainstream star here, but she is a fashion muse that we all watch.

“I am Love,” 2009, is a small film with a tragic end, but gives you an eyeful in every frame.  They had a very small budget but really stretched it because the interiors alone are jaw-dropping.  Antonella Cannarozzi, the costume designer, received her first Academy Award nomination for all her hard work. Coming from an indie film background, I’m awed by what she was able to do with so little.

Emma Recchi, Tilda Swinton, is the Russian wife of a wealthy, aristocratic Italian.  She falls madly in love with her son’s business partner, which leads to a series of tragic events. 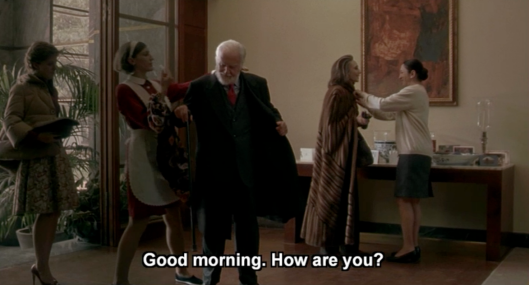 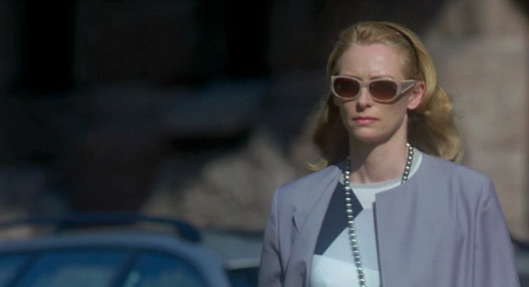 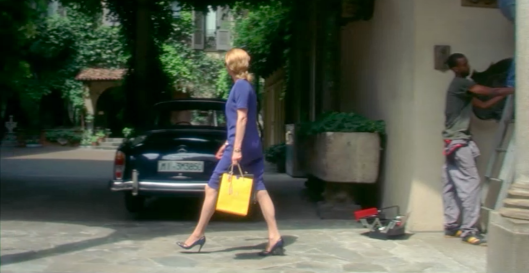 Love the bright blue with that yellow bag. Tilda Swinton. 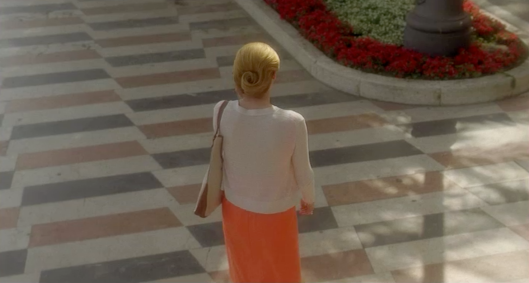 The simple cream sweater with orange skirt, the curved bun in her hair, and the tiles on the ground make this such a beautiful shot. Tilda Swinton. 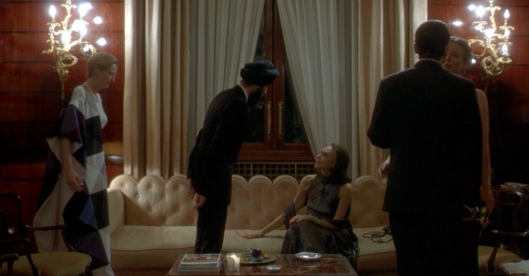 This graphic draped dress is to die for. Tilda Swinton, Waris Ahluwalia, and Marisa Berenson. 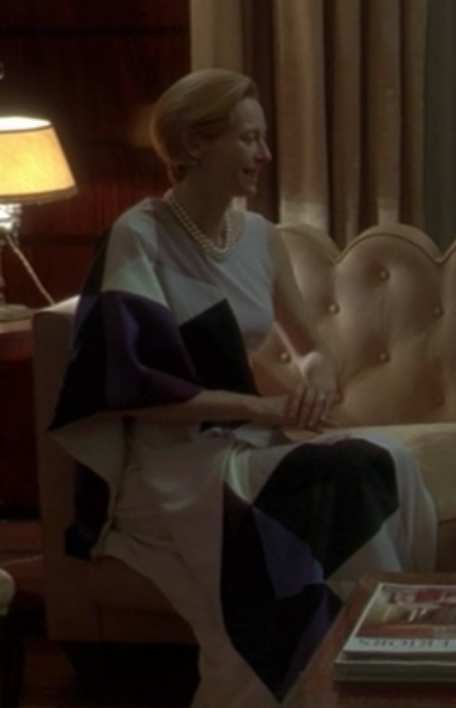 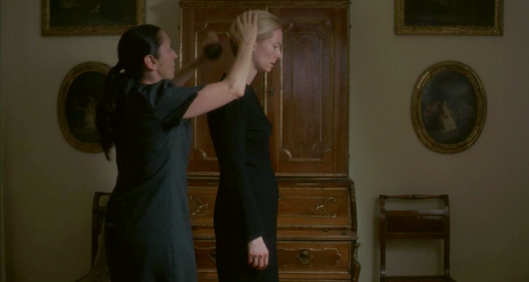 At the end, she’s a mess. No makeup, she needs her housekeeper to get her dressed. A far cry from the beginning of the film. Tilda Swinton and Maria Paiato.

I first noticed her in some Derek Jarman films, but she really popped in Sally Potter‘s “Orlando,” 1992.  This too, was a indie film who’s grand sets and costumes belies its tiny budget.  Costumes by Sandy Powell, with additional costumes by Dien Van Straalen.

Orlando is male at the beginning. 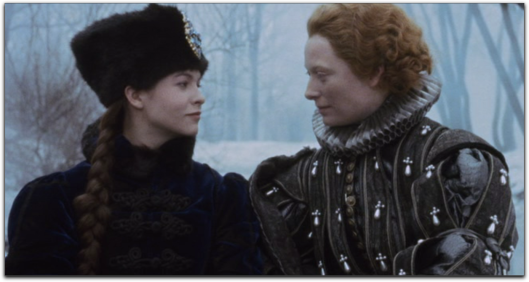 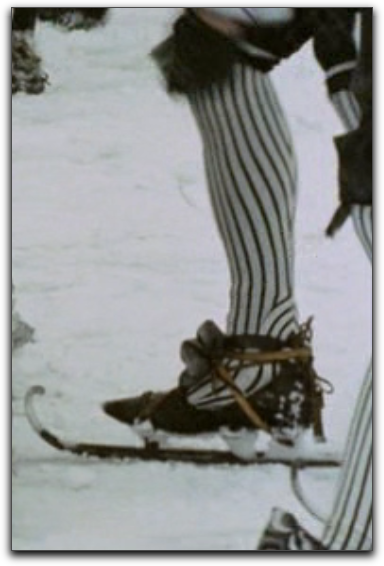 Even the skates and tights inspire. 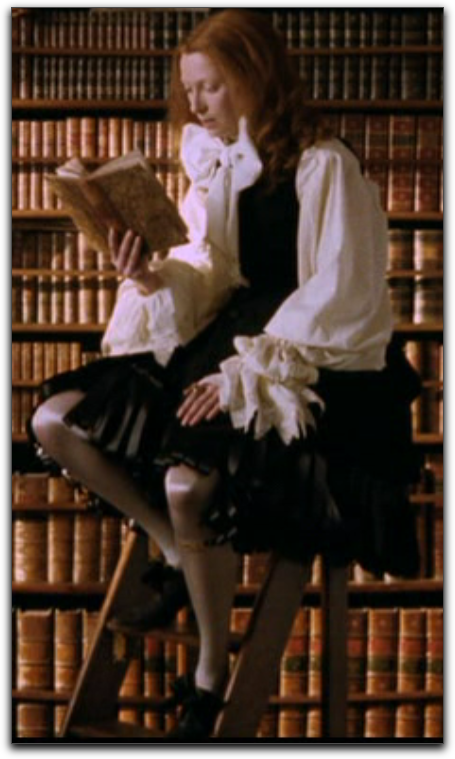 Notice the proportion of the bow and cuffs. Tilda Swinton. 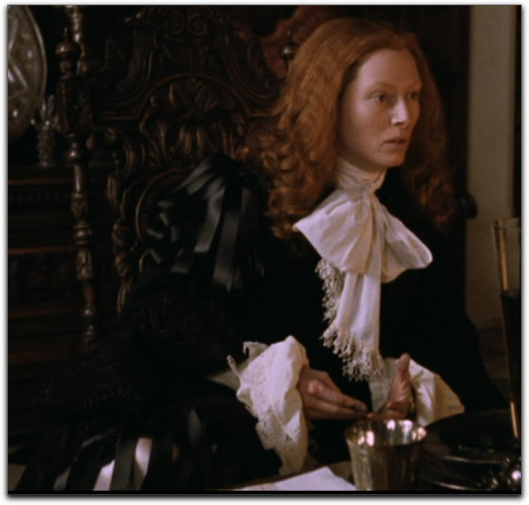 The shirt adds to the look even with the coat worn over it. Tilda Swinton. Full length shot of the coat from the side, check out the ginormous coat cuff. Tilda Swinton.

Love the ruffles down the front and the fullness of the waistcoat. Tilda Swinton. Such a beautifully composed shot. This could be a painting by Jacques-Louis David. Tilda Swinton. 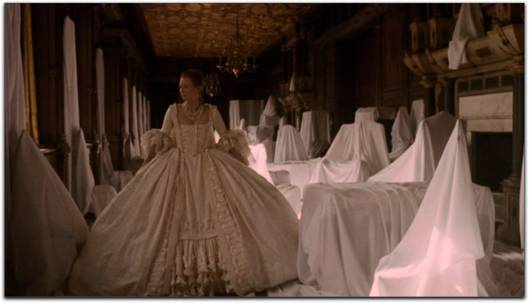 She finds it hard to maneuver around a room in women’s clothes, a metaphor of her life as a woman. Tilda Swinton. 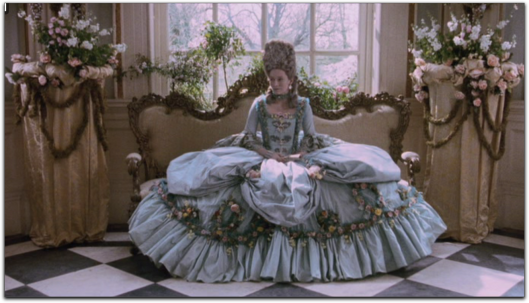 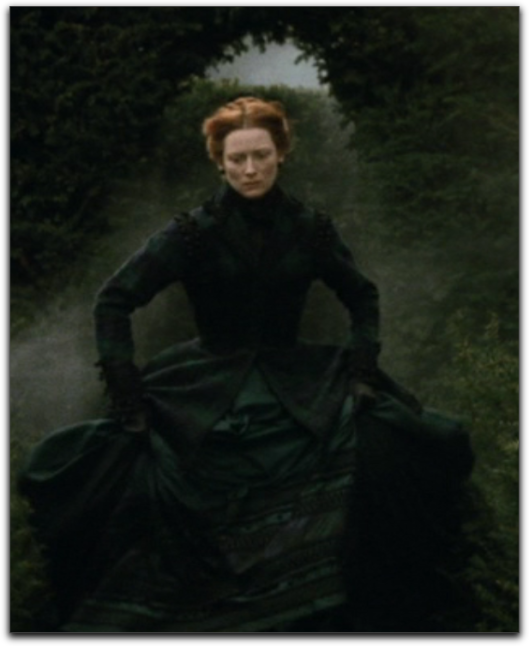 From the back. Tilda Swinton. 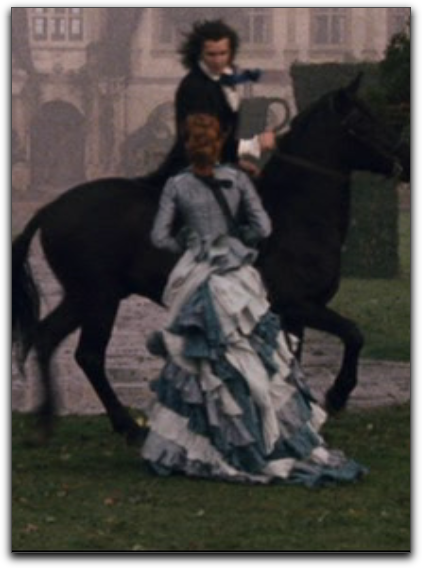 Look at all the different ruffle colors. If it were gradations of white or ivory it would make a unforgettable wedding gown. It looks a little Galliano 1994. Tilda Swinton and Billy Zane. 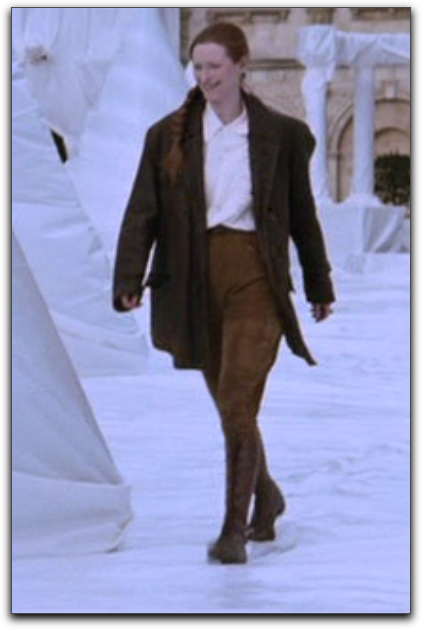 Near the end of the film, independent, a mother, and at peace with herself. An androgynous look encapsulates that journey. Tilda Swinton.

Both films are must-sees for fashionéastes. 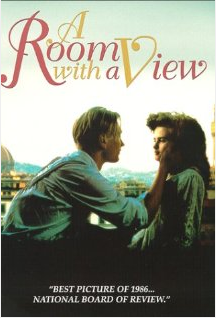 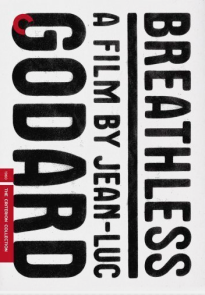 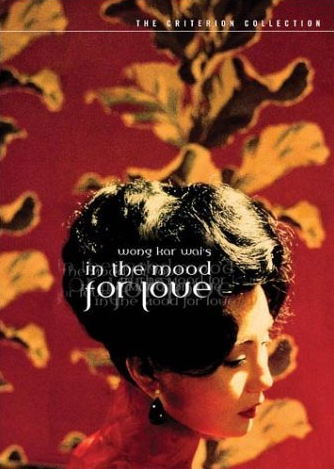 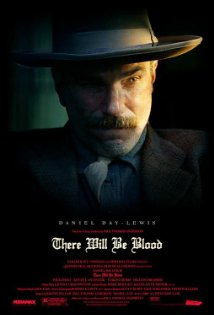